Design a site like this with WordPress.com
Mulakan
Lompat ke isi kandungan

“The King Has Not Been Pleased With Muhyiddin. He was Misled On The Race To 112” – EXCLUSIVE

is a sinking vessel and many of its crew are now questioning why they were recommended to come on board, suggesting they and the Agong were deceived by “PM8″.

Sarawak Report has obtained insider insight into the “disillusionment” felt by several who followed Muhyiddin and Azmin’s ‘Sheraton Move’ in February, imagining they could make the numbers and momentum only to discover that despite blatant and illegal horse trading of posts and positions the elusive majority is still not there in parliament.

And, as the confidence slides, Sarawak Report has evidence that the numbers are secretly slipping back towards support for Harapan, as MPs who won their seats campaigning against corruption have watched with dismay PM Muhyiddin’ s unprecedented  trade-offs and handouts, now humiliatingly confirmed by a recording of ‘PM8′ of him admitting his strategy in advance to fellow plotters.

“Muhyiddin made a suicidal move knowing or unknowingly. He only listens to Hamzah Zainuddin – close aide of Najib/Rosmah, ignoring others’ advice especially from “original Bersatu leaders”.

claims one influential insider. The insider confirms that the former Bersatu leader and founder Dr Mahathir’s angry pushback in recent days has shaken the confidence of several who had supported the nomination of “PM8″.

“Tun M had depended on honesty (& trust)  in Muhyiddin. Dr M was cheated by Muhyiddin & Hamzah. I can see his [Mahathir’s] vengeance/anger towards Muhyiddin..  [he said] “I was backstabbed & cheated by Hmzah & Muhyiddin… ”
He WILL bring down Muhyiddin”

In recent days Muhyiddin loyalists have sought to sack Mahathir from the party along with his four key allies as MPs. The veteran former prime minister has reacted trenchantly staking his position in the party’s headquarters to issue his rejection of that attempt.

With PN’s numbers at best reaching 113 in parliament – a number Muhyiddin and his backers are clearly still too fearful to test with a vote – the failure after three months to convincingly pull off their back door strategy (whilst their opponents in PH have worked to mend their own differences) has plainly startled to rattle nerves and loosen tongues.

As a result, Sarawak Report now has solid evidence that more Bersatu MPs than are claimed dispute the Muhyiddin faction, who allege at least 20 of the party’s MPs are still solidly behind ‘PM8′. The disaffected group believe their party was deliberately infiltrated by UMNO after the election as several MPs changed sides.

The key organiser behind the plotting, Sarawak Report has been told, was Hamzah Zainuddin, whom Muhyiddin has sought to install as the new Bersatu Secretary General (disputed by the Mahathir faction).

“Hamzah infiltrated into Bersatu, now elevated as Sec Gen. He brought in 12 other Umno mp’s into Bersatu”

relates one insider, indicating that at least 8 of the Bersatu MPs currently cited as loyal to Muhyiddin are not.

Listed as ‘team members’ of Hamzah’s operation by one of his detractors in Bersatu are “Dr Latiff (Mersing MP), Nadin (Muhyiddin Polsec), Ainon (Muhyiddin Media ), Dr Marzuki (Muhyiddin Senior Private Sec), Syed Amer (UMNO Youth Exco)”. Such accusations indicate a level of infighting of chaotic proportions within the tiny party that is already split across the two sides of the House of Parliament.

It is happening at a time when the ‘PM8′ has again gone into self-isolation on the grounds of quarantine amidst raging rumours that he is actually about to receive drastic chemotherapy treatment against a return of his pancreatic cancer.

Pictures released late last week designed to show a healthy prime minister at his desk have viralled on social media owing more to the hugely expensive watch spotted on his wrist. That has added to the disgust within his ranks, which he is poorly positioned now to deal with, given he has ten more days at least banned from face to face communications. 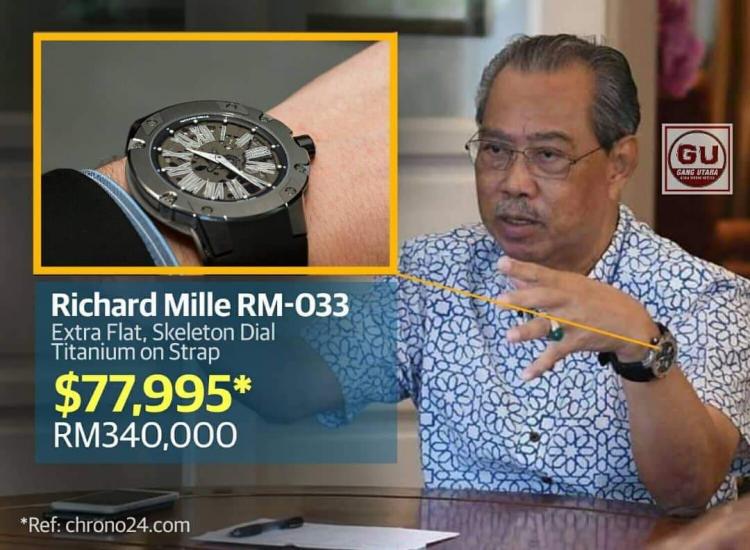 The detractors have told Sarawak Report that the plans orchestrated by the alleged UMNO infiltrators into Bersatu unfolded following the so-called Malay Dignity Conference held last October, which had been organised since August.

The conference, which was in many ways promoted as a celebration of Malay culture and unity became the nationalistic platform for a movement to unite UMNO, PAS and Bersatu in order to target, undermine and vilify the multi-racial majority parties.

There is equal suspicion in the same Bersatu quarters against the new Finance Minister, Tengku Zafrul, brought in as a non-elected official into the country’s second most important political position. They describe him as a relation of Muhyiddin and claimed he used influence at the palace to assist in misleading the King and his officials as to the numbers supporting the PN coalition during the period of the coup in February:

“[The] First attempt to [persuade the] palace was rejected by Palace.. no proof of numbers. Tun M should have been allowed to present actual SD’s of 114.. but instead gave space to Muhyiddin only … Tengku Zafrul was facilitating. A relation to Muhyiddin.
[it was] A bail out for Zafrul as PH gov didn’t want to renew his contract due non performance”

claims one Bersatu member who numbers amongst likely defectors from Muhyiddin. The same source has claimed that the palace is now fully aware that it was misled at this crucial time and that the likely majority lay with PH Mahathir who ought to have been allowed to present his numbers to the King before Muhyiddin was called to the palace and alleged he had a majority backing.

As the voice recordings now confirm, ‘PM8′ had calculated at that time on being able to make up his numbers after the event through a liberal use of old-style UMNO ‘money politics’. However, it appears Malaysia’s new-style popular parties contain enough MPs who have been prepared to put their electorate and principles in front of jumping over to the Muhyiddin ship.

The ropey, fractured nature of the coalition, full of ambitious chiefs and few Indians, combined with the fragile and uncertain health of Muhyiddin himself at a time of a national health and economic crisis has further undermined the project from the start.

Covid gave the coup an unprecedented cover and breathing space, but the conspirators have still not delivered on their promised parliamentary majority. ‘PM8′ has bitten off more than he can chew and those who took their chance with him have told Sarawak Report they now know that to be the case:

“It is fixing time. PH have reached a leadership compromise. This week and next week will be exciting”